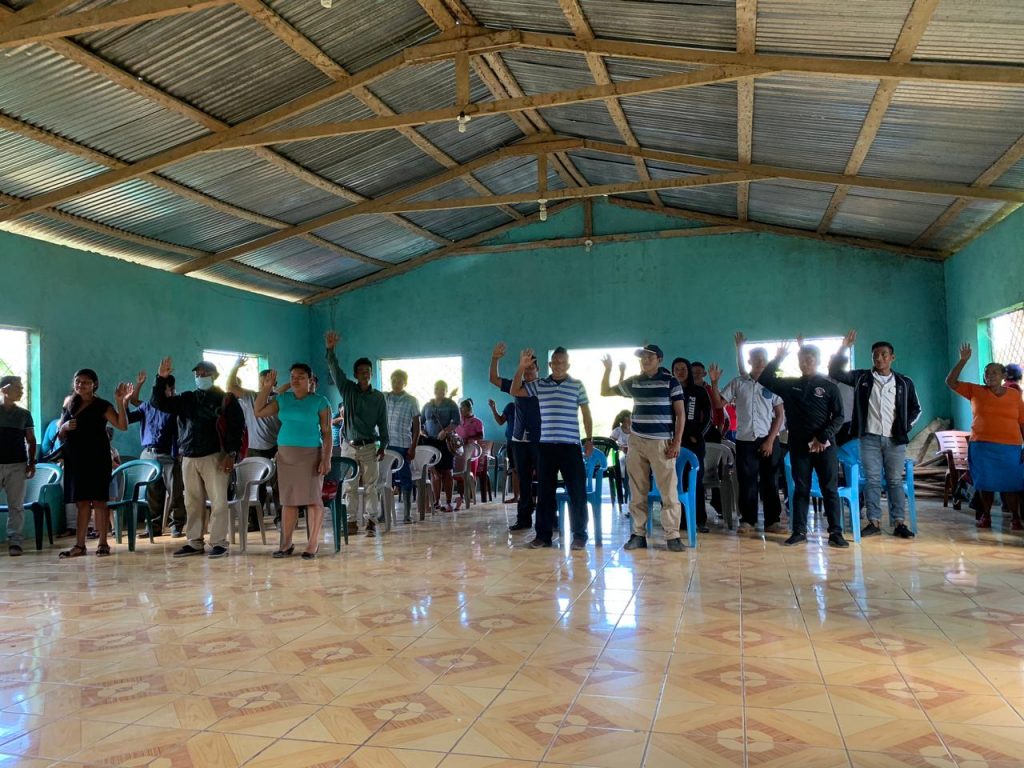 Moment in which the communal assembly of Pansuhwas votes unanimously in favor of the relationship agreement with MLR Forestal.

The agreeement seeks to protect the local ecosystem and promote the development of the Pansuhwas, Mukuswas and Ispayulilna communities, of the Mayangna Arunka Matumbak territory in the North Caribbean

Mayangna Communities of the Mayangna Arungka Matumbak Indigenous Territory and MLR Forestal signed a five-year community relations and mutual cooperation agreement where the main objectives are the protection of the environment and natural resources and the social development of these indigenous communities, within the framework of respect for native peoples, their rules. and governance authorities and their customs.

This relationship agreement involved the authorities of the Matumbak Indigenous Territorial Government (GTI Matumbak), community authorities and the members of the Pansuhwas, Mukuswas and Ispayulilna communities, the three closest to the MLR Forestal operation in Bonanza, in the North Caribbean. The agreeement will benefit these three communities directly, and indirectly, in some issues, the rest of the communities of the territory.

Among the benefits are: inter-institutional strengthening actions, training of women and youth, technical assistance in the establishment and management of cocoa and other crops, employment opportunities, scholarships and reforestation of the areas affected by hurricanes Eta and Iota.

MLR’s good relations with the GTI Matumbak have been built since the beginning of the company in 2013 and as of 2017 a process of formalizing the relationship began, directing it to a novel relationship strategy that led to the signing of a first agreement negotiated between the years 2019 and 2020.

The small Christian temple of the Pansuhwas Community, made up of 45 families and belonging to the Mayangna Sauni Arungka Matumbak territory in the North Caribbean, was the meeting point where the Communal Assembly was held on January 30,to approve this agreement with MLR Forestal that is valid from 2021 to 2025 and the annual operating plan 2021.

A process of dialogue and solidarity

Efraín Benítez Miguel, secretary of the GTI Matumbak, said that there has been a constant dialogue with MLR Forestal that first began with the contact of the GTI and, from there, with the leaders of each area and the population of each community through assemblies . For Benítez, a key point is that the company “agrees with us in our guidelines and principles of defense of Mother Earth and the natural resources of the territory.”

Pedro Orozco López, Community Judge of Mukuswas, expressed in his native language that “it is the first time that a company approaches in this way to work for development.” Meanwhile, Eliázar Damaso Lázaro, Pansuhwas Communal Judge, said he was satisfied with the process carried out during the assembly and described  the agreement as historic, “a new model to advance since the lines of action coincide with our plan as a communal government.”

Modesto William Blandón, Communal Judge of Ispayulilnay, highlighted the importance that throughout the process the company respected their rights and has not left them alone in the midst of difficulties such as the Covid-19 pandemic and the passage of hurricanes Eta and Iota last November.

“With this agreement we hope that MLR will serve as a catalyst for the community projects that they wish to develop to improve their quality of life. The intention is to identify areas  where we can collaborate, actively participate and help these three communities surrounding our operation and the Matumbak territory, to achieve their objectives,” said Sergio Ríos, president of MLR Forestal.

How the relationship agreement was reached

To reach these agreements, the communal governance regulations of the territory in different stages were used as a basis. Since 2019, a community relationship guideline document was jointly built, which was approved in 2020 by the GTI and at the same time the route was built to articulate an operational work plan.

After these documents were approved by the GTI, the presentation and approval was made by the communal authorities of each of the neighboring communities of MLR in Bonanza and, finally, the communal assemblies were held in which the inhabitants of the area discussed and approved the relationship agreement, culminating the third and final consultation process in the Pansuhwas community. With this approval, the three approval processes are completed and the execution of the agreement (2021-2025) and the 2021 annual plan.