Inicio | Green classroom: practical and playful environmental education for the children of Siuna

Green classroom: practical and playful environmental education for the children of Siuna 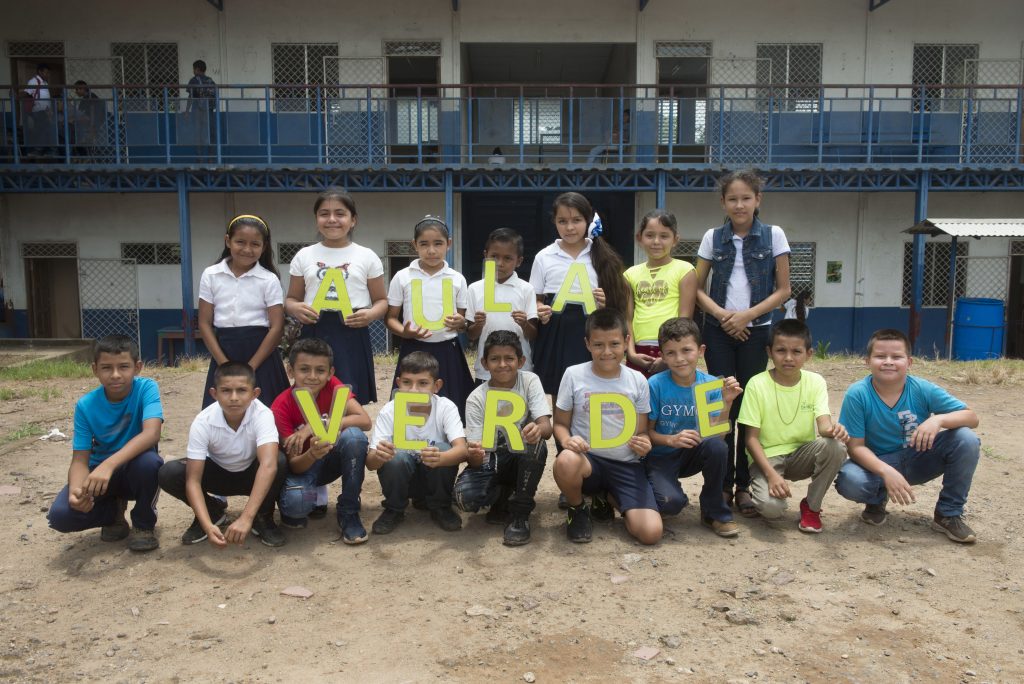 The Aula Verde environmental education initiative has been implemented by MLR Forestal in schools in Siuna for a year and a half.

During one morning, the fifth grade of the Flor de Pino School changes, the classroom of the school located in the rural community Empalme La Bú, Siuna transforms from a space where Mathematics, Spanish, Social Sciences and Natural Sciences are taught and it becomes a Green Classroom. Today boys and girls learn about biodiversity, endangered animals and caring for the environment in an practical and playful way. This is the environmental education program of MLR Forestal.

The boys and girls are expectant and attentive. Abiecer Soza, the company’s head of biodiversity, shows them with a projector photos of the fauna that inhabits the surroundings and the students raise their voices when identifying the animals. “A guardiola (possum)!” “A picón (toucan)!” They shout excitedly. Next, Soza will show them a couple of animated shorts about the spider monkey and teamwork.

An initiative to awaken love for nature

Cleomara Urbina, head of Aula Verde, says that the initiative began when MLR Forestal became a member of the Network of Private Wildlife Reserves of Nicaragua, since the Network has had this program for several years. “We have been working for a year and a half. I received training in various places in Nicaragua. What is intended with Aula Verde is to awaken in people the love of nature and nothing better than learning by doing ”, Urbina explains.

Regarding the enthusiasm and participation of the students during the company visits, Urbina affirms that “the children know a lot, however, they do not have enough information, that is, they know what is around them, but not beyond. I think that’s why when we come they don’t want us to leave and then they ask us when are we going to return ”.

In the classroom, the children now play to identify animals through a dynamic. Soza and Urbina organize two groups of ten students each, divide them into pairs and glue the image of an animal to the forehead of each child. Now, they have to guess, just from clues, which animal they have on their foreheads. There is laughter, screaming, fun, and new data to recognize different species.

The challenge of transmitting knowledge in times of pandemic

This educational center is the closest to the MLR Forestal offices in Siuna. It is located just over a kilometer away and is, next to the San Francisco de Asís school, located in the San Miguel # 1 community, one of the two places where Aula Verde takes place. Counting both schools about eighty children have received the workshop.

Urbina points out with regret that, when the Green Classroom was just beginning, the pandemic caused by the Covid-19 virus arrived and that this has slowed down the work. “But despite that, apart from the schools, in San Miguel # 1 we have had activities with community leaders and with the company’s collaborators because Aula Verde is also done with adults.”

The short film about teamwork was shown because now the children, previously divided into groups of four, leave the classroom and go to the small school garden. It is an open-air terrain, with trees and there they will experience the collection and observation of insects. These will be located in the field, captured with tweezers and placed in transparent and airtight containers that also have a magnifying glass on top. After a few minutes, each team will talk about their experience and show their insects on a white blanket placed on the grass. At the end, the animals are released in the same places where they were found.

Back in the study hall, it is time for engagement. Urbina provides each student with a paper where each one will write what is the commitment they assume with nature. They all set out to the task with seriousness and concentration. Then each one stands up and reads their writing.

“May animals live happily with their children and their families”

Boniell González López is committed to “taking care of the little creatures”. Kendri Medina Díaz to “not kill the birds, do not dump garbage in inappropriate places and do not cut up the trees.” Suni Cantillano Martínez to “take care of the animals so that they can live happily with their children and their families.”

Donald Guido Medina, assistant principal of the center, says that “the children are impacted by the support, the presence of the company. This has been very important for us because they have managed to develop in children love, care, sharing with nature. Last year we had two meetings, this year we have already had two and the children are getting educated ”.

Before leaving, each student receives a poster with the image of the spider monkey, an emblematic species of the area, and a message to prevent its extinction. The idea is that they take them to their homes and put them in a visible place, so that they too communicate the message they have received. When they leave school, they effusively thank the MLR Forestal team, talk to each other, smile and walk home, covering themselves from the strong Caribbean sun with the poster.