Inicio | Curiosities of the howler monkey and spider monkey, the kings of the trees in MLR Forestal

Curiosities of the howler monkey and spider monkey, the kings of the trees in MLR Forestal 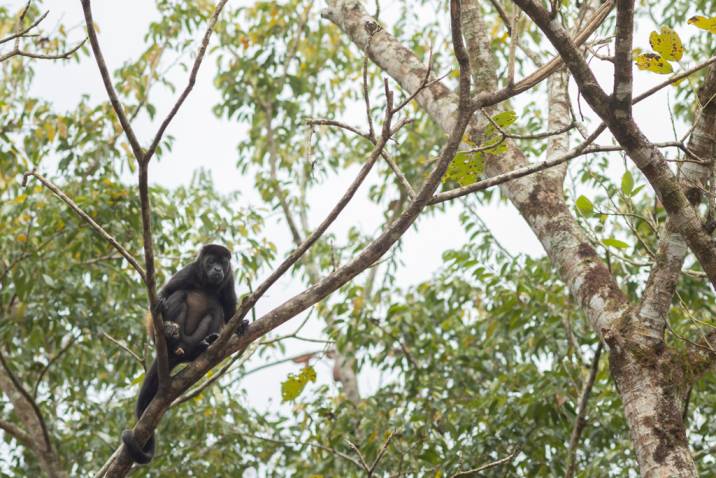 In MLR Forestal, in addition to teak trees, there is a wide variety of fruit trees that provide food and shelter for the monkeys.

The congo (howler) monkey and the spider monkey are the two species of monkey that inhabit the lands of MLR Forestal. Both can be found with the naked eye, if you look carefully at the top of the trees or if you listen to the intense sound emitted by the howler, also known as congo. The fact that both can develop freely on the company’s extensive land is positive and of great interest to MLR, since one of the pillars of the operation is the promotion of sustainability and biodiversity, and both species are under threat.

The howler monkey is in a vulnerable state according to the Red List of the International Union for Conservation of Nature (IUCN). Whiie the spider monkey is in danger, according to the same compilation. For Enrique Castillo, head of Biodiversity Management at MLR Forestal, this difference lies in the fact that “the howler monkey is less affected by the advance of the agricultural frontier, it is more sedentary and can live in a small remnant of forest, while the The spider monkey is a little more delicate, it needs a lot of extension to be able to develop, to communicate from one forest to another and it is more susceptible to climatic changes”.

Another point that plays against the subsistence of the spider monkey is that its sexual maturity begins when it is four or five years old and, from then on, they only have one offspring every three or four years, Castillo mentions.

The mischievous and playful “incomplete” monkey

“The genus of the spider monkey is called atele, which comes from the Greek word atelis, which means incomplete, and this is because it does not have a thumb,” explains Castillo. Another distinctive feature of this primate is that the tip of its tail works “as a fingerprint because it has furrows and no hair. We can also point out that spider monkeys are more mischievous, more playful, more active than howlers,” the biologist points out. .

In the first months of the year, the spider monkey is seen less in the wooded areas of MLR Forestal because it has not yet found one of its favorite foods: the jocote jobo. This type of fruit is more common from May or June. Castillo adds that “apart from this fruit, jocote, the spider monkey eats other fruits, tree bark and honey.”

Split and merge with the noisy spider monkeys

The person in charge of Biodiversity Management at MLR Forestal points out that spider monkeys have “an organization base of division and fusion with respect to the resources that are available. For example, if there is a period of scarcity of food and there is a herd out of twenty monkeys, they divide ten and ten, each group goes to one side and at bedtime the twenty individuals come together again”.

One aspect that unites these two monkey species is the mother-calf relationship. “Both the howler monkey and the spider monkey carry the little monkeys on their backs. This is because when the young are born they are totally dependent on the mother. The first weeks they cling to the belly and then move to the back because their tail is not still functional, let’s remember that the tail is prehensile, that is, it helps them to grab hold of the branches”, Castillo deepens.

A catalog of the mammals that inhabit MLR Forestal

After making the bird catalog available to the general public, MLR Forestal finalizes details to present one of mammals of the region. In this new document you will find photographs and data of the 34 species found in the 16 plantations of the company located mostly in the municipality of Siuna, although they also have some properties in Bonanza. It will be accessible in digital format and for free.

Mammals are an animal group that is in danger due to threats such as deforestation, extensive cattle ranching and hunting. In 2021, for example, a white-faced monkey, an endangered species, was sighted on the properties of MLR Forestal . The individual was apparently injured and may have fled while trying to be hunted.