Inicio | 2023: the year MLR Forestal will erase all traces of Eta and Iota

2023: the year MLR Forestal will erase all traces of Eta and Iota 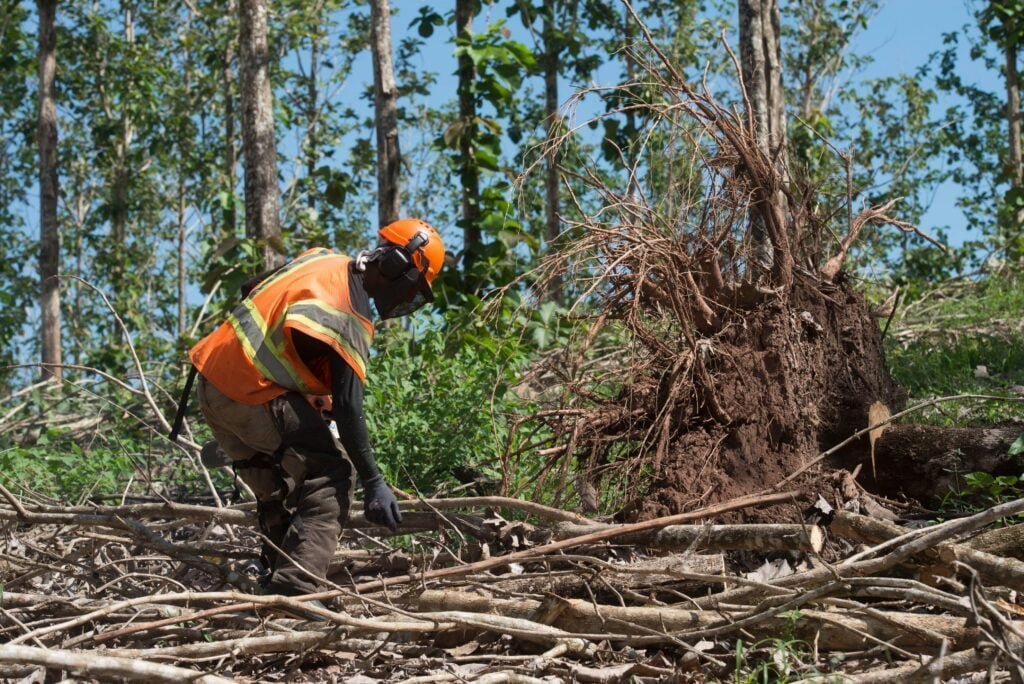 The passage of hurricanes Eta and Iota through the Caribbean of Nicaragua in November 2020 hit MLR Forestal. There were 25 thousand cubic meters of wood knocked down by wind and rain in the plantations of the company in the North Caribbean. Having the damage data, the company decided that the wood would be sold, for which it developed a harvesting plan to lift and process it.

At that time the idea was to complete the work in 2021, although everything would depend on the climate of the area that can be very rainy and, in that case, the chainsawers could not advance.

Mechanization: an extra and necessary help

In July 2021 there was a major change in timber lifting. Until that month the collection was done only manually, but then MLR Forestal also began to work with a skidder and two tractors. The skidder is a machine that extracts wood from where it is lying down to the patios. There are also two Belarus tractors and a crane.

The tractors have helped the process a lot because the wood is placed in their cart and they can go out to a more accessible place to load a truck. “The reason for using a truck is that the tractor is very slow. We have 4.6 kilometers away (with the sawmill of the company) and the most I could do in the day are about four trips with just four meters per trip. While the truck makes between seven or eight meters and is faster in its journey, “says Silva.

For this period the crews were formed by more than 130 people, due to the amount of work and the high demand for wood.

The triumph at Finca San Miguel

By March 2022, the survey teams had cleared and almost fully utilized the eighty hectares of plantations on the San Miguel farm. This farm, located in the community of the same name in the rural area of Siuna, was strongly affected by Eta and Iota.

A peculiarity of San Miguel is that the lying wood was very young. The teaks where it comes from had only been planted in 2016, however the product was suitable for processing in the company’s sawmill. Twenty people were involved in the task of removing the wood from San Miguel and taking it to the industrial area: 15 chainsaw operators, four assistants and a supervisor. In addition to four machines and two loading trucks that took an hour to get to and from the sawmill.

Farms such as Waspado, Mutiguás and San Miguel were the most affected, to the extent that the extraction of the wood has been completed, the land has been rehabilitated for new plantations. That is, the conditions for future planting have been established.

The last 5,000 cubic meters launched by Eta and Iota

In the first half of 2023, sixty people including operators, assistants, field workers and chainsaw operators will erase the traces of Eta and Iota from the lands of MLR Forestal. This means lifting the last 5,000 cubic meters of wood knocked down by hurricanes. It will be a task shared with the normal routine of the company because it will be done along with teak thinning.