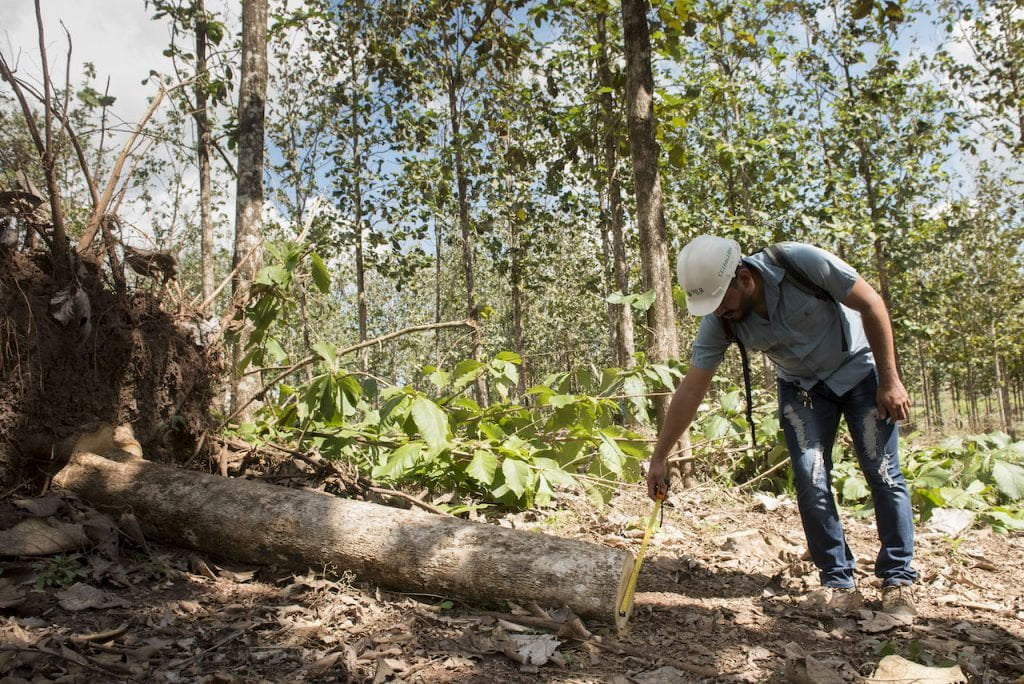 Hurricanes Eta and Iota that hit the North Caribbean pf Nicaragua in November 2020, also affected MLR Forestal. There were 26 thousand cubic meters of wood knocked down by the wind and rain on the plantations of the agroforestry company in the Mining Triangle. However, these trees from the teak forest plantations did not “die” in vain because their wood will be used, nothing will be wasted.

Félix Jaime Silva is a forestry engineer and head of forestry use, and in front of him there is a huge area with trees, some lying down and others standing. There is the noise of chainsaws and in different areas on the edge of the open road in the middle of the forest there are logs cut and stacked.

“The hurricanes affected us because we did not plan toharvest now, due to the age of the trees, but it would be worse to lose everything so we decided to harvest. This teak is barely 10 years old and the idea was to reach 20, but the volume that comes out can be used ”, explains Silva.

Teamwork is the key

In January, Félix Jaime and his team of eight chainsaw operators, three assistants, nine loaders and three transporters began work in the field.

The first procedure that the group performs is the basal cut (that is, from the base of the plant) and the delimbing of trees. Later they continue with the chopping, which is to produce logs in roll with a measure of 2.30 meters in length. This is the uniform lumber seen on the roadside and then loaded onto trucks and unloaded at the company’s sawmill.

While it is true that teak trees do not reach maturity until after at least 15 years of age, this felled wood is suitable for commercialization. Silva points out that the logs they harvest can have different sizes “depending on the order we have and the diameter requested (by the customers).”

“This wood can perfectly be comercialized nationally or used for internal company work, in infrastructure,” adds the manager. 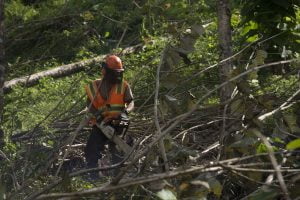 A year of work or a little more

Touring the MLR Forestal farms in the Siuna area is seeing two faces of the same reality. At some points the teak trunks rise straight and healthy to several meters high, and at others the plants lie battered on the ground or remain standing but curved.

“It is planned to do it this year, but the weather is varied and when it rains or breezes the chainsaw operators cannot move forward. Also right now the logs are heavy because they are loaded with water. We started working on January 20, but projections could be made within two months ”, says the forestry engineer.

The data provided by the National Forest Institute (Inafor) after the passage of the hurricanes were shocking in the North Caribbean. On November 6 , when only Eta had made landfall, 1,650 trees of different species had already fallen; and that only in the urban and peri-urban sectors. However, in the Isnawas area, Prinzapolka, it also affected the forest on the river bank.

By November 18 , after the passage of Iota, 1,722 more fallen trees were counted, again, counting only in urban and peri-urban areas of the municipalities of Rosita, Bluefields, Bilwi and the departments of Boaco, Carazo, Managua, Rivas, Jinotega, Matagalpa and Zelaya Central.

The devastation of Hurricane Felix, a bad memory in the region

The most terrible thing is that in this region he had already gone through this before. A report carried out by the Research and Development Institute of the Central American University (Nitlapan-UCA) determined that as part of the damage to the forest ecosystem caused by Hurricane Felix —which made landfall on the North Caribbean Coast of Nicaragua in October 2007— 512,165 hectares were highly affected. The majority 509,813 was broadleaf forest and the rest pine forests.

Similarly, the Food and Agriculture Organization of the United Nations (FAO) through its report Evaluation of Damage Caused by Hurricane Felix in the Caribbean of Nicaragua said that, at that time there were some places in the northern area of the Caribbean, in which more than 75 percent of the trees were felled. “What we saw, which was a paradisiacal place in terms of forests, flora and fauna, practically now nothing exists. The destruction is immense ”, describes the text.