Inicio | Teak thinning: This is how you get only the best trees

Teak thinning: This is how you get only the best trees 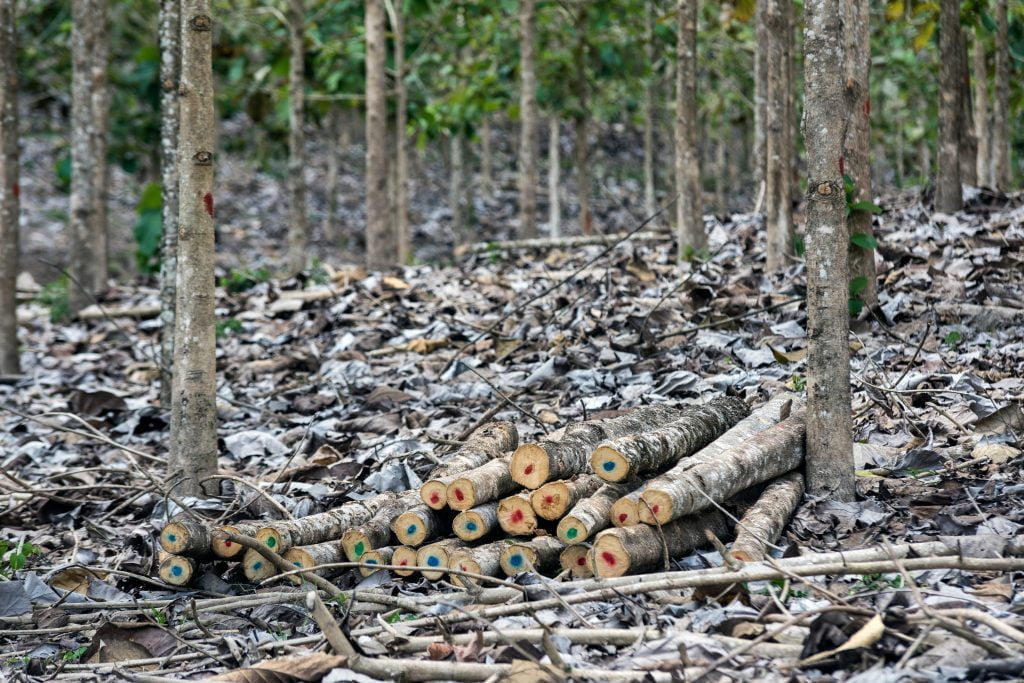 To say that MLR Forestal’s trees are the best is not a cliché. In reality, when teak wood is harnessed it means that this tree went through several phases in its life in which it “survived” as it was an element that deserved to be developed. These phases, which are part of a sustainable and renewable cycle, occur every four years and are called thinning. In the company, a tree undergoes four thinning, before final use when the tree is twenty years old.

Thinning is the method or technique used in forest plantations to remove a certain amount of trees within one hectare. In general, the technique is applied by sanitation or by selection; but in MLR, thinning by selection is applied, which is to eliminate the trees that do not have a straight axis and leave the best individuals to gain more volume and thus obtain more wood to market at the end of the twenty-year cycle. Health thinning, on the other hand, is carried out for broken or diseased trees, although it is not the thinning that is practiced in the company.

Félix Jaime Silva, head of Forest Use at MLR explains that the company keeps an annual growth control in each hectare in order to manage the annual increase of the sections and then every four years to lower the density.

In a hectare where only teak has been planted, “it starts with 625 trees per hectare, four years later 450 are left, then we go down to 300 and the final harvest according to estimates we have made is 150 trees per hectare which are the best individuals throughout the area both in diameter and height, so that you can make the most of them “, he says.

The 625 trees are planted in the case that the hectare is only teak, however, in agroforestry systems such as those that MLR also has, the thinning process is different since fewer teak trees are planted per hectare.

For example, in MLR plantations cocoa is also grown in association with teak, in those areas the number of teak trees is lower. At the beginning, teak is sown, the following year a line of acacias is planted and the following year, when they have grown to provide enough shade, cocoa is sown. Then a year later the acacia is cut and then teak thinning begins. Cocoa takes five years to produce.

Silva adds that “before thinning, the marking is done, that is, the density plots are determined, so we know how many trees per hectare there are and how many are going to be cut, then we proceed to thin out and then verify that what is left are the individuals that were selected”.

In MLR Forestal, when one hectare reaches two decades, the teak is cut down and that hectare is planted again and the cycle begins again, a hectare will never have more than a year without tree cover.

The National Forest Office (ONF) and the National System of Conservation Areas (SINAC) of Costa Rica propose the following benefits of thinning in the producer ‘s guide :

• Avoid competition between trees and allow the best ones to continue to grow.

• It generates greater economic income since the price of coarse logs is much higher in the market, because they yield more in the sawmill and allow the production of higher value products (furniture, construction wood, among others)

• Develops healthier plantations, with greater aeration and entry of light, avoiding the generation of pests and diseases.

The impact of Eta and Iota on thinning

Throughout this year Félix Jaime Silva and his team will be raising trees as hurricanes Eta and Iota that hit the Caribbean Coast of Nicaragua in November last year knocked down and damaged trees that now need to be used. “The hurricanes threw down even more than the density that had to be thinned out,” says Silva.

Chainsaw operators, assistants and drivers of the trucks that take the cut logs to the company’s sawmill participate to carry out the thinning. The wood that is felled is not wasted as it is used internally by MLR Forestal, for infrastructure and other needs. Thinning is also used to commercialize the wood in the national or international market, it depends on the characteristic of the tree and the purpose.