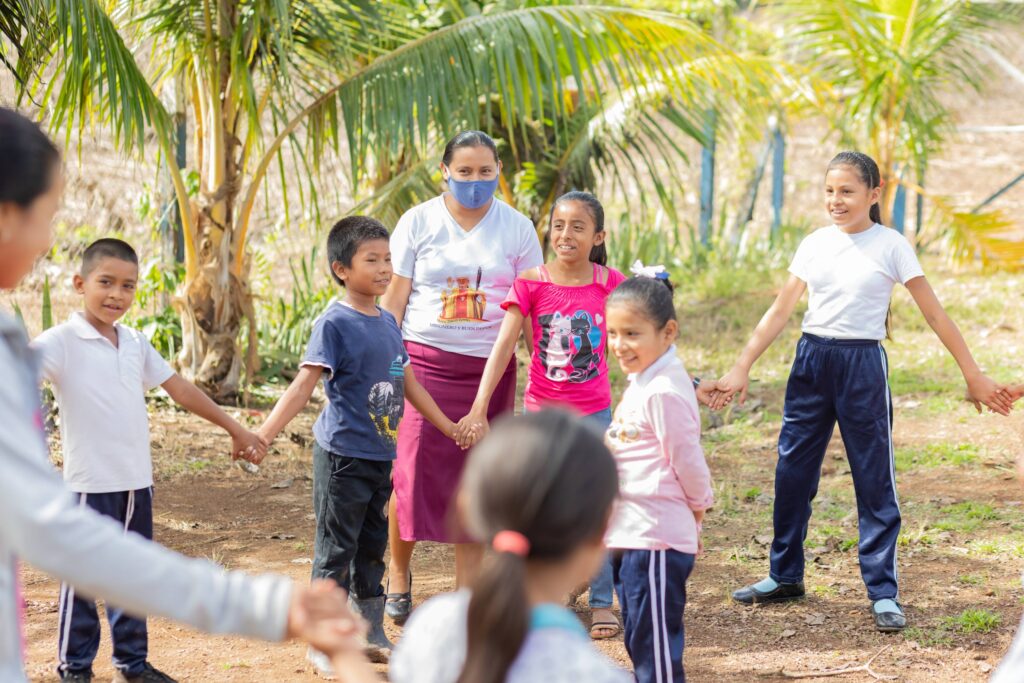 "My dream is to keep going until I get retired, to see my children grow up, to have a chance to have a profession just like me," says Professor Marivel Rodríguez Sánchez.

Marivel del Carmen Rodríguez Sánchez has often had to walk two hours one way and another two hours back to go to a teacher training workshop. Four hours under the sun of the North Caribbean or on slippery mud on the lonely trails that connect the San Miguel community with other towns such as Villa Tadazna or El Guineo. All to be a better teacher. She represents the best values on this Teacher’s Day, teaching in a remote community of Siuna.

San Miguel is one of the neighboring communities of MLR Forestal that is most remote in the rural area. It was also one of the plantations that was hit by hurricanes Eta and Iota of 2020: eighty hectares of plantations were devastated by cyclones on MLR Forestal farms. From the St. Francis of Assisi school you could see the destruction and from there you can also see now the replanting of teak trees. In this small multigrade center is where Marivel has been teaching for eleven years.

However, the history of the teacher began far from San Miguel, specifically in Mulukukú, Matagalpa, where she was born 32 years ago. Daughter of parents dedicated to agriculture, she was the second of eleven siblings “nine alive and two deceased”. When Marivel was seven years old, her family moved to Siuna, “I wen to elementary school at the Niño Jesús school, for secondary school I attended the Parish Institute and for my teaching carreer I attended the Róger López Borge Institute,” she recalls.

“Here you could only walk with rubber boots”

For this woman with long hair and dark eyes, there was no practice prior to becoming a teacher. “They sent us directly to communities as titular teachers. A colleague recommended me and at once they sent me to San Miguel, it’s the only place I’ve been teaching,” she admits.

When she talks about her first days in the community, Marivel says she didn’t start with children but with phone numbers: she had to call the parents to let them know there was a new teacher at the only school in the area, that they would have confidence and decide to send their children. The school had a small house for the teacher in charge and the young educator lived there alone for a year.

“After that year, I got married and my husband, who is from here, started taking me out for the workshops because the road was terrible, dangerous, with big puddles. You could only walk in rubber boots from school to the road. To this day many children, have to wear rubber boots most of the time because there are parts that are still in poor condition,” she says. her only companion on those journeys that she still undertakes is her eldest daughter who is now ten years old.

She says that on this Teacher’s Day her greatest success has been to graduate seven or eight high school students and the happiness to see one of her pupils become a university student. This is a very remote area where schoo l desertion is very high.

From the hill where the San Francisco de Asís school is located, one can oversee a small grocery store, the Catholic chapel of the town, wuich is small, and a couple of other houses. The rest of the view is mountain, trees, flowers, the immensity of the sky, some cows, chickens, dogs and, beyond, more scattered houses. The landscape cuts the breath for its natural beauty, but also for its isolation.

“For eleven years I’ve been teaching multigrade. It’s six degrees every year, the minimum I’ve had is four. Some parents are disappointed because they say that children do not learn what they should because there are many grades and, I tell them that they have to understand that there are six grades,with twenty, twenty-five students and for a single teacher it is quite difficult,” Marivel says, although immediately her face lights up and speaks with pride: “So far, of the students I have had, there are seven or eight high school graduates and one is studying his career university.”

For Marivel, the key to the success of her students depends, in the first instance, on the parents. “It depends on the parents, if they support the children to come daily to class, the teacher feels encouraged.” With encouragement the teacher starts the school year, because she usually has about 37 students enrolled, but when she reaches the end of the first semester there are already between 30 and 32 and, at the end of the second semester there are less than 30 students. Desertion caused by poverty, migration or difficult access to school is the evil against which the teacher fights daily.

“Most of my kids want to be teachers”

Asked about when during the school year she feels more joy and faith in the future, Marivel singles out September, known as the Month of the Motherland. “What makes me happy, what gives me hope of seeing something good are the Fiestas Patrias. For us September is the month importnat month. More important than Mother´s Day, Father´s Day or Teacher´s Day. Not even Children Day (first of June). We had never celebrated Children Day until this year. This year we organized a party, and the children enjoyed tasty food and games, but we were able to do it because we did not celebrate Mother’s Day (May 30) because some parents could not afford it and I understand because it can be very expensive to have back to back celebrations.”

She understands the situation because she is also a mother. Her daughter Marilín is ten years old and his son Sandor is six. She teaches them both: he is in first grade and she is in fifth. Both in the same classroom. “The boy likes to study less, but his dad already knows he has to help him.” The children’s father, her husband, named Álvaro, works in the fields, but is currently a worker in the construction of a Catholic parish in San Miguel.

The teacher, who due to her work, values and closeness with the kids is also one of the leaders of the community, smiles when narrating a last anecdote of something that motivates her and makes her happy. “During the statistical table class, we have an excercise where I have to aks the children what they want to be when they grow up, and most of them want to be teachers, more than policemen, doctors or pilots. 20 out of 30 kids say they wanto to be teachers,” she says.