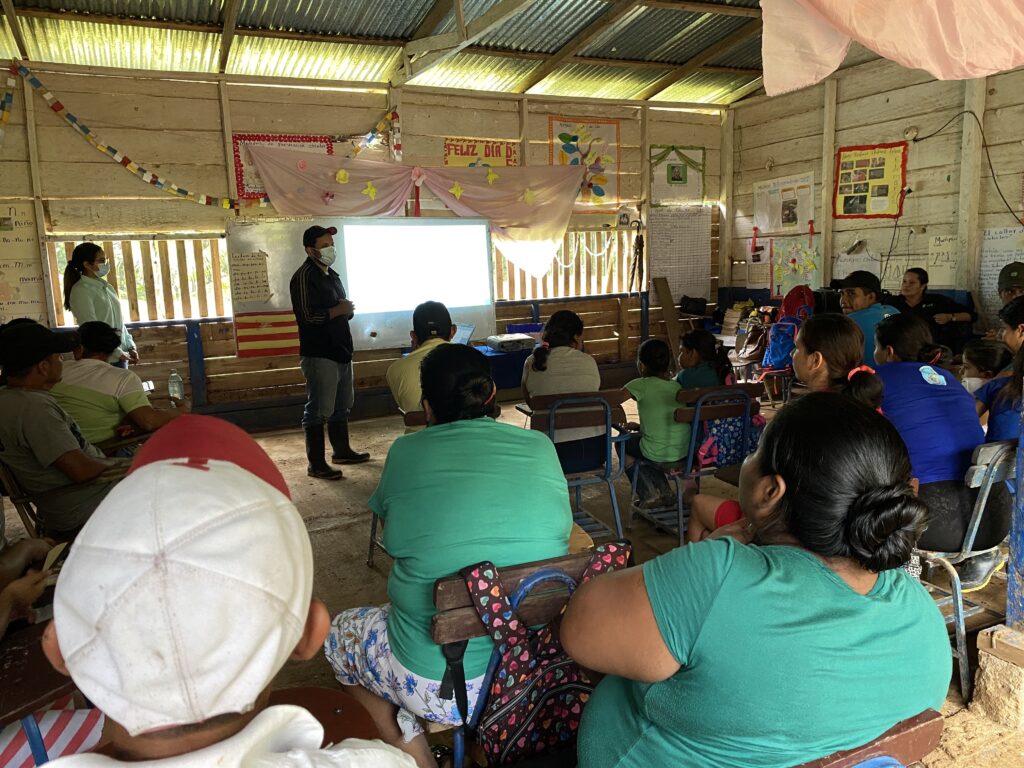 The trainings will cover the communities of San Miguel #1, Unión La Bú, Bethel #2, Empalme La Bú and the neighbors of Mutiwas, Waylawas, Tadazna and Waspado.

Fidel Sequeira, a resident of the Bethel #2 community in Siuna, recalls that as Hurricane Eta (which hit the Caribbean in November 2020) approached, “people didn’t think anything was going to happen.” And yet, it happened. So, he joined to support his community.

“I was the coordinator of the brigade that was formed with the institutions and with the other members of the team we were working. In the Church of God, the pastor had been blown away by the whole roof of the pastoral, so we moved people to another church. It wasn’t thought something like this was going to happen because it hadn’t happened for years, but then we knew what a hurricane was. Even my house was shaken by the wind, but since it is in a high part thank God nothing happened. In the church we evacuated seven people, in another house twelve and in the hamlet on the other side of the river, two families were evacuated,” recalls Sequeira.

It has been because of the possibility that an emergency situation like that happens again that MLR Forestal has focused on the education of its surrounding sectors to prepare prevention plans for natural disasters.

A vigilant attitude for the prevention of natural disasters

Cinthya Córdoba, in charge of Certifications of MLR Forestal says that “at the end of April I was reviewing the meteorological data for this year and I realized that they have similarity with the year 2020. I wanted to focus on neighboring communities having the vision of what could happen again so that now we don’t get caught off guard, but that we have a plan for evacuation, brigades and more knowledge of what we can do before, during and after these events,” she explains.

At Bethel school #2, the people in charge of Social Management, Hygiene and Safety and Certifications of MLR meet with the villagers to talk to them about the climatic emergencies they could suffer (hurricanes, floods, landslides) and organize with them an emergency plan. The 21 participants identified the most exposed points of the community and chose the brigade chief, shelter chief and evacuation chief.

Francisco Acuña is the brigade chief of Bethel #2. He stressed the importance of organizing to avoid dangerous situations because in the town “there is a little ravine that in a second is filled. A few days ago a family could not cross, so I told them that I was going to pass them with a rope and that had to be done.”

Cinthya Córdoba said that people “are collaborating a lot, for example, in the community of San Miguel that is practically incommunicado when the La Bú River grows, we already have the security zones, the shelters and the brigades have already been formed. Now the monitoring and measurement area of the company will support us with maps so that the population has the coordinates of the shelters.”

Finally, Mabel Lazo, responsible for Social Management reported that MLR Forestal is working together with firefighters to visit the houses and places chosen as shelters to assess that it has the necessary conditions for people if a natural disaster happens.