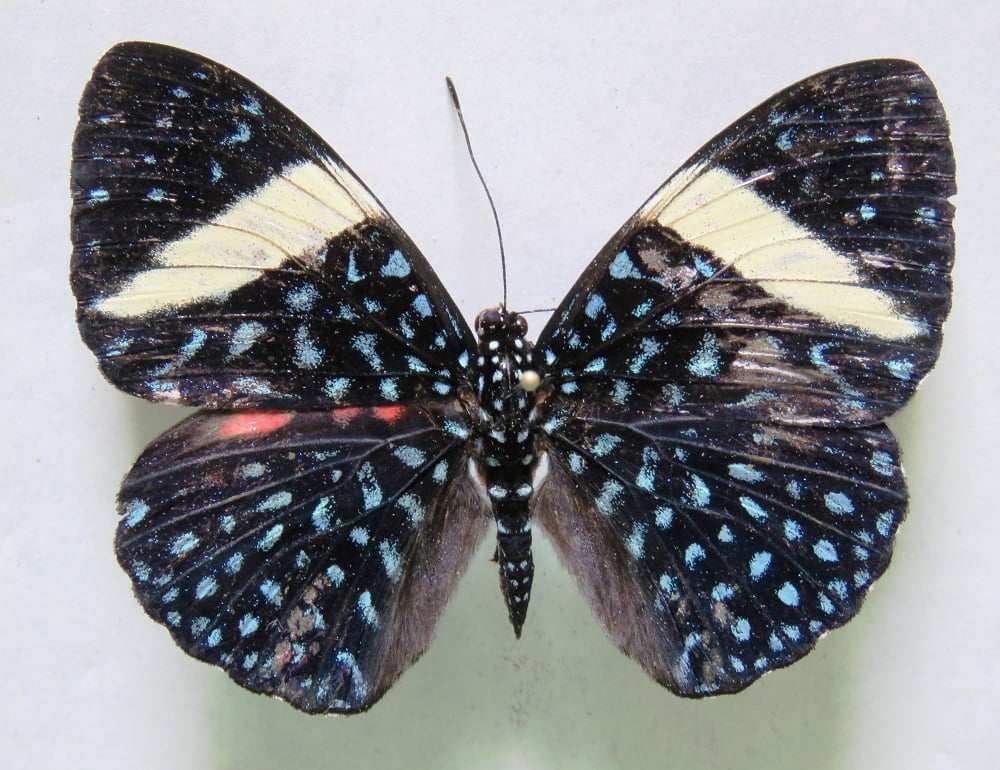 In July 2017 and over the course of a week, 16 special traps made with a mixture of banana, pineapple and sugar were placed by researcher Kevin Gauthier at the MLR Forestal plantations in Siuna. With them, 72 species of butterflies were captured that were later identified by the entomologist Jean-Michel Maes. All the research findings were reflected in the study: Butterflies of the Private MRL Forest Silvestre Reserve, in Siuna; and Maes affirms that due to the location and special conditions of the area, there may even be twice as many species.

“With a little effort that number would double. The plantation is in an area bordering the Pacific premontane forests and Atlantic humid forests and must potentially be very rich. You have to keep scratching a little bit and I’m sure there are more things to learn there,” he says.

The phenomenon of hamadryas

For Maes, who is of Belgian origin, but has lived in Nicaragua since 1983, what surprised him most about the study was finding butterflies typical of the Pacific on the Caribbean Coast.

“There are butterflies of the genus hamadryas in the Pacific and in the Caribbean, and those of the Pacific, obviously, I wasn’t expecting them there. And there are two explanations: They are on the border between the two faunas or because of the deforestation that exists throughout the area, butterflies from drier areas are moving, because where it is deforested what is growing is dry forest, the climate is changing ” . explains the entomologist.

Another species that caught Maes’s attention is the Nessaea aglaura, which in his own words is “very pretty” and can be seen on the cover of the document. In this map you can see their presence on the continent and when zooming in Nicaragua see that they are only located on the Caribbean Coast.

These were degraded lands

The more than five thousand hectares in which the MLR Forestal operation is carried out were degraded lands; that since 2012 the lands have been bought by this company, to develop an afforestation project that basically sows teak and cocoa.

The fact that the plantation is now home to so many species of butterflies confirms one of the objectives of the company, which is to contribute to the development of the area with an environmentally sustainable project.

Research was “a seed” of “citizen science”

The results of the study: Butterflies from the MRL Forestry Private Silvestre Reserve, Siuna , were published in the Nicaraguan Journal of Entomology, a recognized publication in the Network of Scientific Journals of Latin America and the Caribbean, Spain and Portugal (Red ALyC).

“The idea when this research was done was like a seed. We did a short investigations in 14 private nature reserves in the country, with the idea that the owners or the personnel of the companies could train a little and continue taking photos of the reserves and upload them to the iNaturalist website ”, adds Jean-Michel Maes.

iNaturalist is a virtual platform created by the University of California, where people can upload photos of fauna and flora so that, through forums, the portrayed species can be identified. This platform also includes the work of Gauthier and Maes.

“People always believe that scientific work has to be done by scientists and it is not true. In the last twenty years in some countries there has been something called ‘citizen science’ that allows normal, ordinary citizens who are not scientists or biologists to make observations, take photos. Many times the problem is that there is no follow-up,” says Maes, who is also the creator of the Entomological Museum in the city of Leon, in Nicaragua.

A proposal for the future

One of the first photos included in the study is not of a butterfly, but it is still shocking. It is a bright green “species of lizard” with black highlights and long limbs. It is on the leaves of a plant about to advance on it with a threatening air.

For a place with such natural wealth as the MLR forest plantation in Siuna, the scientist’s recommendation is, as far as possible, to continue the work started by Gauthier and by him.

“If they have the funds and can hire a small team of people to continue investigating, that would be great. Or someone who is fond of taking photos may be enough. What we did was plant a little seed. It would be better to hire a young biologist with a lot of capacity to take photographs of nature, who documents all the species that he sees of plants, birds, frogs, uploads them to iNaturalist and there they will gradually identify themselves ”, concludes the specialist.