Inicio | Marvin Fonseca: the young man who supervises the nursery of MLR Forestal

Marvin Fonseca: the young man who supervises the nursery of MLR Forestal 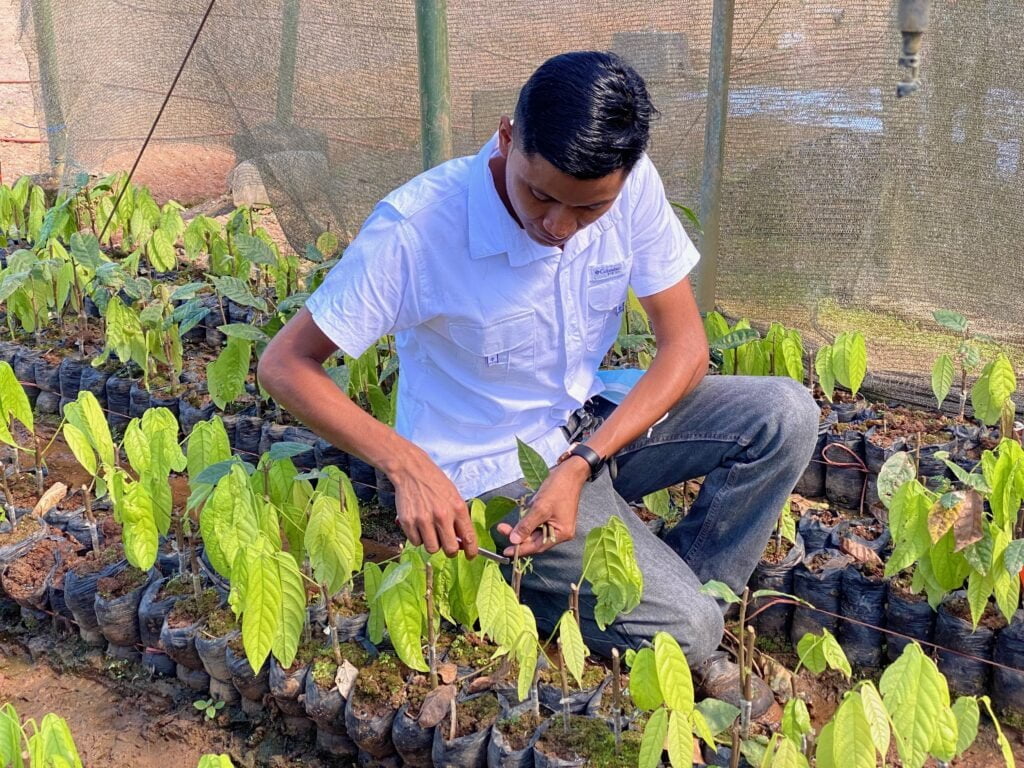 Two events that occurred in his childhood marked the life of Marvin de Jesús Fonseca: the death of his father when he was barely a year and a half old and the beginning of his working life at the age of fourteen. Because of the former, his mother had to take care of him and his eight siblings by herself, and thanks to the latter came his love for cocoa. This happened because in the first company where he worked, he cut genetic material for grafting.

“I stayed three or four years, I learned to graft, I fell in love with cocoa and eventually I was put to lead groups of grafters. I remember that the first one was ten people and I was younger than everyone and they called me El Niño (the boy),” he says.

Starting to work so young was a consequence of his father’s absence. When he died, only one of Marvin’s brothers was of legal age, so the youngest soon became involved in the field work of the small family farm located in El Tuma-La Dalia, Matagalpa. Then the opportunity arose to work in a private company and Marvin took it.

From his first experience, Marvin did not stop. One of the engineers of the cocoa company took him to Tipitapa to establish a nursery “of two hundred thousand plants” and to lead groups of grafters who had to move to different parts of the country. By then, Marvin had finished high school, but hadn’t started college.

“It was pretty tough. For example, I had to spend six months in Nueva Guinea without going home. There I walked from one farm to another, washed my clothes in pipes, put them to dry on the hood of the truck. We worked from five in the morning to six in the afternoon and at night we traveled to another farm,” he recalls.

The eagerness to learn and his “worst decision”

In Tipitapa Marvin worked for two years for another company, this one of Israeli origin and it was a great challenge for him. “I had to manage the nursery, but I knew 10 or 20 percent of Excel, so at night I studied on my own because I wanted to learn. I Googled the formulas. I learned by myself, now I master Excel about 80 percent,” he says proudly.

During 2014 and 2015 he studied Agronomy at the University in the field belonging to the National Autonomous University of Nicaragua (UNAN), but abandoned the studies to go back to work. “That was my worst decision, to think that I was fine in my job and that I didn´t need to continue studying. Humans make mistakes and that has been one of mine,” he laments.

Marvin describes himself as a person who loves to study. He is passionate about mathematics and four years ago he returned to university, but in another career: Nursing. He says the radical change was because he loves the countryside, “but there are times when you burn out and you also want to learn from something else.”

Marvin studied nursing on Saturdays and Sundays, so she could work in agriculture during the week. He managed to do it for a year. “For the second year, a cocoa project emerged in Bluefields. I traveled from Bluefields to Matagalpa for four, five weekends, then the project ended, I invested everything in my studies because I had already started internships because with the wages I eaned in agriculture it was not enogh. A job opportunity arose on a farm in Granada, I tried to combine it with studies, but I could not and again I left the university.”

It was after the Granada experience that he was contacted by Gino Zambrano, director of operations of MLR Forestal. Marvin came to MLR as a grafter, but when the previous nursery supervisor left the position, he was offered the responsibility. And he took it.

During the conversation, Marvin mentions his mom several times. For him the most difficult thing is still to be away from her and his greatest interest is summarized in supporting her and sharing by her side. Of all her siblings he is the closest to her and, since he lives in Siuna and she in La Dalia, he assures that he tries to call her at least every other day.

At 26, this thin brown boy speaks as if he were twenty years older. “I had to mature young, but everything I’ve done is to get ahead, I like to think about the future,” he says with a smile.